While the trade fair landscape has been characterised by reports of cancellations in recent weeks, the German organiser scene – as things stand today – is proving to be reliable. Although some dates had to be postponed, the organization of all known events has otherwise been confirmed. With its recently published catalogue, 4-kidz.eu confirms that orders can be placed in this country from the end of July.

In recent years, the summer round in June was always opened by the Pitti Bimbo in Florence (cancelled), the ordering in Germany started around Playtime Paris (cancelled) and ended with the CIFF Youth (cancelled) in August.

But this year it is different because of the impact to fight the corona pandemic. The big fairs announced first dates later in the year and then cancelled. Since no organizer cancels an event lightly after many months without any trade fair business at running costs, the restrained registrations from exhibitors have prompted the organizers to cancel the Summer Round 2020. Alternatively, some organizers have announced digital exhibitions.

The German ordering scene is repeatedly criticised as fragmented and fragmented. Zentrale Events wie die Children’s Fashion Cologne in Köln konnten sich nicht durchsetzen. But apparently there is a force in the decentralized orientation by regional organizers, which is just now becoming apparent in summer 2020. Because while the big events are cancelled, all organizers in Germany will open their doors – as things stand today.

The prelude to this will be made at the end of July 2020 by 4-kidz.eu in the House of Euromoda in Neuss. The character of the house with its showroom currently offers the advantage of being able to optimally arrange the traffic routes, order areas and hygiene rules for the safety of all.

Already in June the team around centre manager Dirk P. Goeldner had organized the fixed order days in the house. The event has shown that visitors and exhibitors can safely meet and exchange information about the coming season.

Now the next event is coming up with 4.kidz.eu – and the first order days in Germany this summer. As in every season, a catalogue will be published for this event, which can already be viewed to prepare the dates.

The catalogue, which is also available in digital form, lists all exhibitors and presented brands at the event on around 40 pages. With pictures from selected new collections, trade visitors can get in the mood for the new ordering round.

Almost 20 temporary exhibitors complement the two dozen or so permanent showroom operators from the children’s fashion segment. A good 100 brands in total are on site. 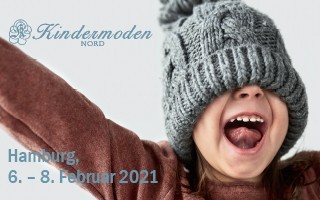